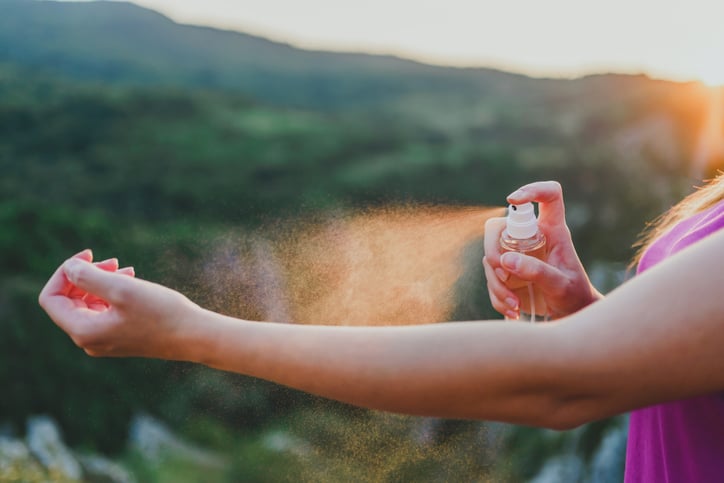 With COVID-19 restrictions lifted in most areas, summer activities are on the rise. Unfortunately, with increased outdoor time comes an increased risk of bug bites — and the accompanying health dangers they carry. Mosquitoes and ticks are the worst offenders, but simple protective and preventive measures can help reduce the risk of insect-borne illnesses while maximizing the benefits of the great outdoors.

Although mosquitoes are considered the deadliest animals in the world according to the Centers for Disease Control (CDC), they do play a vital role in our ecosystem. Male mosquitoes, for example, eat nectar and pollinate several species of plants. They are an essential food source for other animals and insects, including bats, reptiles, birds, and amphibians.

Scientists are also exploring the medicinal benefit of mosquitoes in treating cardiovascular disease. That same mosquito saliva that causes so much irritation may help unlock the development of new anti-clotting drugs.

Likewise, ticks provide an essential food source for reptiles, amphibians, and birds. They also serve as a benchmark species for other populations. Scientists monitor tick populations to gauge the health of the overall ecosystem, and low tick populations could be a sign that something is out of whack.

As much as many people might wish otherwise, eradicating mosquitoes and ticks altogether would result in a significant disruption to multiple ecosystems. That said, the dangers they pose are equally significant, and should be understood by everyone spending time outdoors.

West Nile virus (WNV) is the most common virus spread by the Culex species of mosquitoes, which are found throughout most of the United States. The introduction of the virus in the United States occurred in 1999 via birds, which are the natural hosts, or vectors, of the virus. Mosquitoes feeding off infected birds then became viral vectors themselves, carrying WNV to humans.

Most reported cases of WNV occur between July through September, and symptoms include headache, generalized weakness, nausea/vomiting, fever, skin rash, muscle, joint, and eye pain in approximately 40% of cases. In severe cases, encephalitis can result in subsequent neurological impairment such as memory loss, tremors, seizures, confusion, and paralysis.

The Zika virus spreads through the bite of an infected Aedes vittatus mosquito. This species is also an effective vector of dengue, chikungunya, and yellow fever. The most common symptoms of the Zika virus include fever, headache, rash, joint pain, conjunctivitis, and muscle pain. The symptoms last for a few days or up to a week; however, asymptomatic people can also transmit the virus, and a blood or urine test is necessary to confirm the diagnosis.

While hospitalization and death rarely occur when infected with the Zika virus, there is no vaccine or medication to protect against it. Thankfully, as of 2019, there are no reports of the Zika virus transmitted by mosquitoes in the continental United States or territories.

The bite of an infected Aedes mosquito species spreads dengue. Dengue is common in more than 100 countries globally, and occurs most often in the US territories of Puerto Rico, the US Virgin Islands, and American Samoa. In addition, Hawaii, Florida, and Texas have reported outbreaks of dengue, though almost all dengue cases reported are from travelers infected outside the United States.

Approximately 1 out of 4 people infected with dengue will become sick. Severe dengue is life-threatening, requiring immediate hospitalization. Symptoms of dengue may present as a rash, muscular and joint aches/pains, vomiting/nausea, fatigue, belly ache, vomiting blood or bloody stool, or bleeding from nose or gums.

Four main species of bacteria, Borrelia afzelii and Borrelia garinii, cause Lyme disease in the United States. Lyme disease is transmitted through the bite of an infected black-legged tick, known as the deer tick, and spending time in grassy or heavily wooded areas where ticks thrive increases the risk of becoming infected.

A deer tick must attach for 36 to 48 hours to transmit Lyme disease. The early signs of an infection appear as a small, red bump like a mosquito bite at the tick bite or removal location. Within one month, a rash may appear, followed by a fever, chills, fatigue, headache, neck stiffness, and swollen lymph nodes.

If untreated, other Lyme’s symptoms may include spreading rash, joint pain, and neurological issues such as Bell’s palsy, muscular weakness, and meningitis. Less common symptoms can include irregular heartbeat, hepatitis, eye inflammation, and severe fatigue. Treatment for Lyme disease includes antibiotics such as doxycycline, amoxicillin, and cefuroxime axetil.

RMSF is transmitted by the American dog tick, Rocky Mountain wood tick, and the brown dog tick. RMSF exists in most of the United States; however, five states (North Carolina, Oklahoma, Arkansas, Tennessee, and Missouri) account for more than 60% of the cases. In addition, RMSF has been reported in some regions of Arizona over the past few years.

The risk of fatality increases if treatment does not commence within the first five days of symptoms. Therefore, prescription of doxycycline is imperative to prevent severe damage or possible death.

Dive deeper into this topic with our Nursing CE course, Diagnosis and Management of Tick-Borne Illness.

The CDC recommends insect repellents as the first line of defense against disease-carrying mosquitoes and ticks. Choice of repellents or pesticides depends on the nature of the outdoor activity, the region of the country, the length of time spent outdoors, and personal preference.

Floral scents in soaps, deodorants, lotions, and perfume attract mosquitoes, as do smelly feet, dirty socks, and even the natural chemicals our bodies produce when sleeping. Conversely, lavender, eucalyptus, lemongrass, rosemary, clove, peppermint, cedarwood, and citronella are all scents that repel mosquitoes.

Safely enjoying summer weather should start with a clothing inventory. Long hikes through deep forests or tall grass heightens the likelihood of tick and insect bites, so it is important to cover exposed skin as much as possible. Wear light-colored clothes, hats, long-sleeved shirts, long pants, and socks to make it easier to see the tick. Tucking shirts into pants and pants into socks prevents mosquitoes from entering under clothes.

Mosquitoes lay their eggs in standing water, so it is critical to drain, change, or remove items that store water, including birdbaths, uncovered buckets, trash can lids, unused flowerpots, drains, gutters, water troughs for animals, and wading pools.

Mosquitoes are active from dusk to dawn, so avoiding outdoor activity during this period can also reduce exposure.

Ticks thrive in wooded, grassy, bushy areas. Gardening, camping, hiking, hunting, and dog-walking through those areas increases the risk of exposure to ticks. When possible, hike on designated trails in order to reduce exposure.

A full-body examination is necessary to find and remove hidden ticks, paying particular attention between the toes, groin, back of the knees, behind the ears, the hairline, the armpits, and behind the ears. Removal of ticks requires a fine-tipped tweezer. Grasp the tick near the skin and use a firm and gradual upward pressure without twisting. After removal of the tick, wash the affected area with soap and water.

Although some species of ticks and mosquitoes transmit diseases, they serve a purpose in maintaining our ecosystem. Protecting our health and our ecosystem is achievable by taking preventative measures to reduce the risk of potentially life-threatening mosquito and tick-borne diseases.

Grow your career and fulfill your CE with Elite Passport Membership—available for nurses, physical therapists, occupational therapists and more.