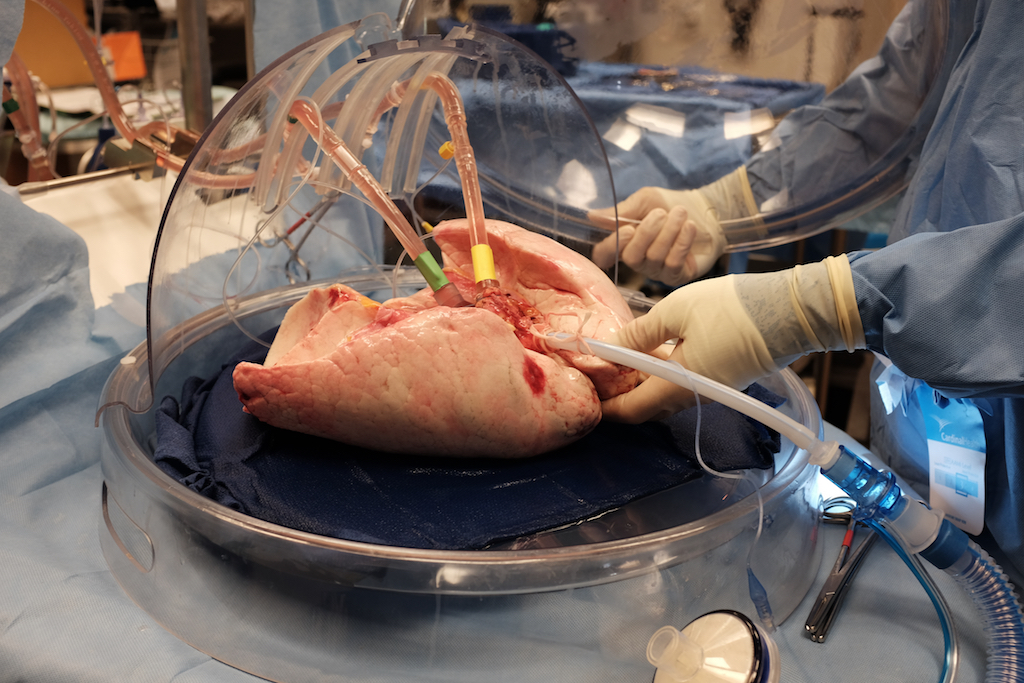 In May, John Herzig, a former Oklahoma school superintendent, became the first patient in Texas to be transplanted with lungs evaluated with EVLP technology. EVLP enables surgeons and the medical team to evaluate and recondition donated lungs. With this innovative technology, lungs that would have been previously discarded due to any number of reasons can now be made potentially viable for transplant.

A team of nurses at the facility was chosen to be part of Herzig’s surgery. In fact, the nursing team was in charge of preparing the lungs and monitoring their progress. Trained in running the EVLP machine, these nurses played a vital role in the transplant.

“The most interesting part is watching the lungs being ventilated on the machine,” said Jeannette Coppola, BSN, RN, an assistant nurse manager at UT Southwestern who is trained on the EVLP equipment.

Coppola’s co-workers agree. Mollie Seim, RN, BSN, CCRN, who participated in Herzig’s transplant, said that getting to touch a lung was something she didn’t expect to experience during her career. “Seeing human lungs breathe outside the body is something I’ll never forget,” she added.

The nurses who worked on Herzig’s lungs had 12 hours’ notice before surgery began and were in charge of setup and maintenance of the EVLP device. “The nurses’ responsibility is running the device from setup till surgery,” explained Kimmons. She said that the nursing team was trained in-house at the center prior to the surgery in May.

For a typical transplant, the harvesting team-the physicians removing the lungs from a donor-call ahead to let the nurses know a lung is on its way for EVLP ventilation, explained Lori McGarry, MSN, RN, an assistant nursing manger in the ICU. Before the organ’s arrival, the nursing team sets up the complete circuit for the lungs-acquiring Perfadex from the pharmacy, ice from the operating room and getting the EVLP technology in place. They prep for the next 4 to 6 hours. During this time, the lungs are ventilated, monitored and prepared for transplant.

“This process allows physicians to assess the viability of donated lungs,” which can’t always be determined during harvesting, Coppola said. Once harvested, a physician needs to determine whether or not the organs can be used. The machine gives the physicians additional time to see if donated lungs are viable.

The nurses are responsible for the lungs while on the machine. “Once the lung gets there, it moves pretty quickly” recalled Seim. “If anything goes wrong, this person doesn’t get this lung.”

Amit Banga, MD, assistant professor of internal medicine and pulmonologist, assists the nursing team as they remove waste products and run nutrients through the lungs.

“The basic job of the lungs is to get oxygen into the blood and that’s something that we can assess and maybe improve with this technology,” Banga explained in a press release. The EVLP team watches for three main things: the transfer of oxygen, pressure in the blood vessels and the ability of the lung tissue to stretch and expand. The team watches for the lungs to expand like a balloon then return to regular size.

The EVLP technology, which has been approved in Europe and Canada for medical use, has been through clinical trials in 16 facilities in the United States. More than 500 lung transplants have been performed at UT Southwestern, which made it an ideal candidate for the EVLP clinical trial. UT Southwestern began incorporating EVLP in 2013.

“We had wet labs once a month to train,” Seim explained. “We had four real lungs to work on [before Herzig], but they were deemed unusable before they ever came to us.” The nursing team used these unusable lungs for learning purposes only. Now they continue to have wet labs using a mechanical lung called the Jensen lung.

Donor lungs can be deemed unusable for a number of reasons. Not being a donor match, prior smoking history, possible lung damage (if the donor was in an accident), infection and exposure to infection are just a few reasons a donated lung can’t be used.

According to data from the United Network for Organ Sharing (UNOS), 2,075 lung transplants were performed in the U.S. in 2015, however, more than 200 people died while waiting for a viable lung. UNOS is a nonprofit organization that manages the nation’s organ transplant system. Almost 2,000 people are on record this year waiting for a lung.

Lungs are declined in the operating room more than any other organ. The EVLP machine and technology aims to reduce the number of waiting recipients by working with lungs that are almost viable and “cleaning” them to make them usable for transplant.

Before being placed on the machine, a fluid called Perfadex is run through the lungs during harvesting to clear out the lungs and preserve them.

“Sometimes a right lung is good and the left isn’t [or vice versa], and someone could use that lung,” said Coppola.

The lungs are preserved in a sterile dome called an organ chamber while on the EVLP machine. Once the lungs reach 32 degrees Fahrenheit, the nursing team starts to ventilate the lungs. A special solution is run through the blood vessels of the lungs. Designed by Stig Steen in 1998, Steen solution provides the transplant organ with nutrients, proteins and electrolytes, among other things, in order to improve the physical status of the organ while outside the body. Steen works to remove any fluid from the lungs. If the lung tissue gets wet, it’s no longer usable.

“It’s exciting that we’ve already had one case where the machine worked. The patient is doing well,” said McGarry. After his transplant, Herzig remained in the hospital for 2 weeks, then was moved to a temporary apartment close to the hospital for monitoring. In a couple of months, Herzig should be able to return to his daily routine.

“Knowing [the lungs] were going into somebody made it real,” said Seim, calling the experience humbling and gratifying. She noted that through this program, the nurses and physicians worked side by side, which enabled them to get to know each other on a different level.

Kimmons hopes the findings and clinical trial results will be applicable to ex-vivo transplant of other organs. “Increasing our donor list is an amazing part of this process,” she said. “Being able to cannulate, place the lungs on a device-on a ventilator-and have them inspire and expire as normal lungs inside the body do is also amazing.”

The UT Southwestern nursing team continues to train on the EVLP machine and has expanded to nine members since the initial surgery.

Autumn Heisler is a former staff writer for ADVANCE for Nursing.