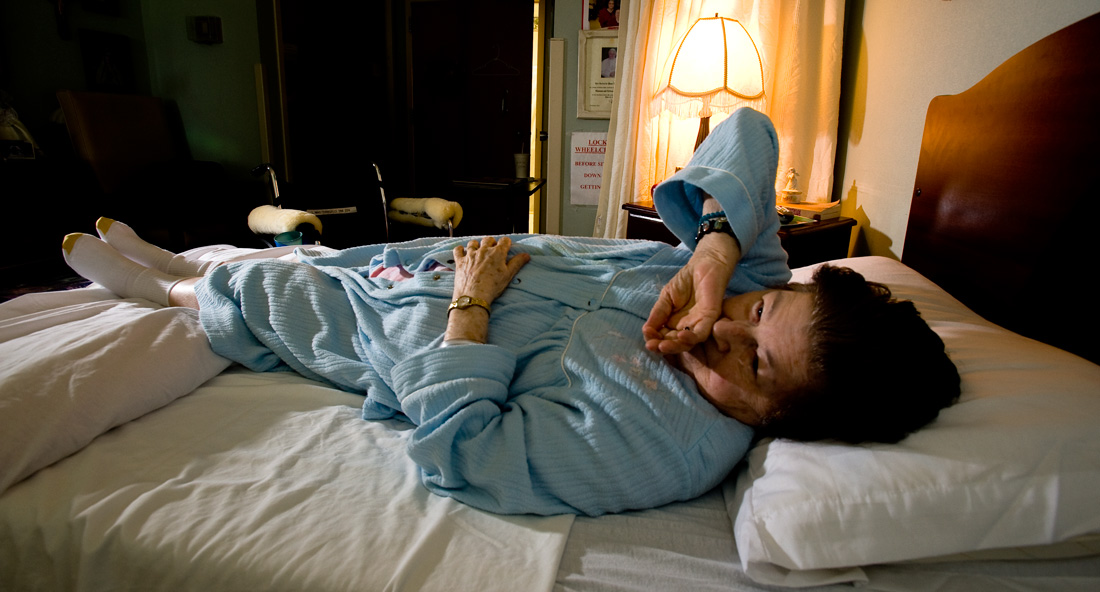 When patients are recovering from traumatic injuries and confined to bed rest, the main goal is to get them up and moving as quickly as possible. Sooner is better than later.

With patients in intensive care, each day immobilized in bed can increase the chances of additional complications involving various body systems, from musculoskeletal issues to pulmonary problems. Clinicians should focus on the following areas.

Excessive bed rest can lead to contractures, muscle weakness and a loss of skeletal mass.

Myogenic contractures are due to intrinsic or extrinsic factors. Intrinsic factors include muscle damage due to hemorrhaging, edema, inflammation, ischemia or myopathy. Extrinsic factors, such as spasticity, paralysis or immobilization from shortened posture, act on normal muscles and cause them to lose normal elasticity.

Contractures form with changes to type III and type I collagen. Type III collagen is loose and coiled, and surrounds muscles and tendons, while type I is dense and located in ligaments. In five to seven days, type III collagen begins to shorten. In about three weeks of muscle immobilization, type I replaces type III and muscles become densely contracted.

Capillaries shorten and straighten in muscle held in shortened posture, such as lying down, for six to eight weeks. These capillary changes may explain why contracted muscles hemorrhage when stretched too quickly. After a few months of bed rest, muscles start to lose sarcomeres—the contractile structural elements of striated muscle fibers.

Lack of motion can also cause arthrogenic contractures. Capsular fibrosis can occur during simple immobilization, but fibrosis is worse when cartilage is damaged by infection, trauma or inflammation. Early remobilization appears to slightly increase synovitis, although it may help preserve articular cartilage in the long run.

Strength deficiencies. Muscles that aren’t actively contracted lose strength at a rate of 10 percent to 15 percent per week. After four weeks, a patient may only have 50 percent to 60 percent of his total strength left. The 50 percent figure is more accurate in the presence of various contributing conditions, such as acidosis, infection, neoplasm, uncontrolled diabetes, renal failure, burns and trauma.

These conditions accelerate protein loss through the ubiquitin-proteasome pathway. This pathway is activated during these states and, as a result, protein conjugates with ubiquitin and marks it for degradation. Antigravity muscles (quadriceps, trunk extensors) are typically more severely affected than other muscles.

Remember that it takes time to regain strength after a period of immobility. A good rule of thumb: It takes twice the length of the period of immobility in a relatively healthy patient, and even longer in a clinically sick patient. Much of the strength improvement in the first one to two weeks after remobilization is due to central neurological “resynchronization.” After that, strength increases are primarily due to muscle hypertrophy.

Skeletal mass loss. Bones and tendons need the pull of gravity to maintain mass. Bed rest inhibits osteoblasts and activates osteoclasts, which lead to a breakdown of bone. Urinary calcium excretion increases by the second or third day of bed rest; maximum loss occurs after one month. The return to normal bone density is slow and often takes three to six months. Paralysis and premorbid osteoporosis in.crease the risk of significant bone loss.

Patients who’ve been immobile for at least several weeks won’t regain premorbid bone density for several months. During this recovery period, they’re at increased risk for fractures if they fall.

In addition, patients can experience an increase in disc fluid, since these structures rely on movement for nourishment. Discs imbibe and swell with bed rest.

Patients with discogenic low back pain often experience increased stiffness and pain in the morning when injured discs swell, which then puts pressure on sensitive annular and vertebral endplate structures. Negative outcomes for treating low back pain with bed rest may be due to the disc’s need for movement.

Bed rest can in.crease the risk of kidney stones. Kidneys are retroperitoneal and posterior. The course of urine moving through the bladder and urethra is inferior and anterior, which works fine when a patient is sitting or standing upright. However, bedridden patients are basically urinating uphill when they’re lying down. When patients also have weakened abdominal and pelvic floor musculature, incomplete emptying and urinary statis can occur. This can lead to renal and bladder stones.

To prevent stones from forming and to ensure adequate bladder emptying, encourage patients to get up to urinate if possible, instead of allowing them to rely on a bedpan.

Negative nitrogen balance. Excessive bed rest can cause atrophy of intestinal mucosa and glands, while decreasing the rate of nutrient absorption. These changes can contribute to increased muscle catabolism, which leads to a negative nitrogen balance. This starts by the fifth day of bed rest and peaks during the second week. Nitrogen balance usually returns after a patient’s been up for the same amount of time that he’s been down for bed rest.

Constipation can cause malaise, anorexia, pain, intractable hiccups, mental anguish, nausea and vomiting in patients who are trying to recover from illness or trauma. Consider using prevention techniques, such as stool softeners, fiber and fluids, before constipation sets in.

As with other joints and muscles, those responsible for respiration (neck and trunk muscles) deteriorate with bed rest.

Weakness and tightness. Costovertebral and costochondral range of motion decrease. Weakness of the diaphragm, intercostals and accessory muscles of respiration develop. The rate of decline for respiratory muscles is similar to that of other muscles. Therefore, negative inspiratory force may be about one-half of what they were initially after four weeks of bed rest.

In the presence of central or peripheral neurological conditions associated with muscle paralysis, a patient has less physiologic reserve, says Dr. Goldberg. And during bed rest, the rate at which inspiratory force deteriorates is greater.

Optimizing mechanical factors are equally important as an antibiotic choice with respect to successfully clearing a nosocomial pulmonary infection. For instance, you should help the patient turn, sit up (so the lungs can dangle) and mobilize.

The endocrine system can fall victim to decreased carbohydrate tolerance and generalized hyporesponsiveness.

Decreased carbohydrate tolerance. Insulin-binding sites decrease with carbohydrate intolerance, and hyperglycemia can develop. The severity of this problem is directly related to the length of bed rest. And if the patient is taking steroids, it only exacerbates the situation.

Carbohydrate metabolism seems to return to normal rapidly with isotonic—not isometric—exercise. There’s also evidence that even one exercise session can increase the insulin sensitivity for insulin-resistant patients.

Generalized hyporesponsiveness. Bed rest may reduce androgen levels. It also may decrease growth hormone release in response to hypoglycemia, ACTH levels and the amount of catecholamine released from the adrenal medulla.

Watch carefully for rapidly decreasing insulin requirements and hypoglycemic episodes as a patient is simultaneously mobilized and tapered off steroids.

Postural hypotension. When patients are moving from supine to upright, roughly 700ccs of blood move from the chest into the lower extremities. The sympathetic nervous system maintains blood pressure, which leads to the release of catecholamines. In turn, venous tone and venous return to the heart increase, along with a rise in heart rate and arterial performance.

After three weeks of bed rest, however, this mechanism is completely blunted for reasons that aren’t clear. But return of postural reflexes occurs between three and 10 weeks. Patients who are elderly, more severely traumatized, ill or have other predisposing tendencies toward postural hypotension, such as autonomic dysfunction in patients with diabetes, may need more time to recover. Patients are also at higher risk for falls due to cerebral hypoperfusion associated with postural hypotension, Dr. Goldberg says.

Those with coronary or cerebrovascular disease are at risk for stroke and myocardial infarction with remobilization. Remember that coronary arteries fill during diastole and that diuretics and antihypertensives may derail postural pressure control. Lower extremity compressive stockings and abdominal binders can help these high-risk patients.

Decreased cardiac function. After two weeks, stroke volume decreases by about 15 percent and a resting heart rate increases by 0.5 beats per minute per day of bed rest. After three weeks, VO2 max decreases by 25 percent.

Return of exercise tolerance after three weeks of bed rest mirrors the return of postural reflexes, which takes about three to 10 weeks of activity.

Volume redistribution. With recumbancy, 700ccs of blood flows to the thoracic veins and right atrium. Cardiac output temporarily increases and the kidneys may believe that there’s too much intravascular volume.

Renin and ADH release are suppressed and “extra” sodium and water are excreted; plasma volume decreases by 12 percent by the fourth day. As a result, the effective circulating blood volume decreases and blood viscosity increases. Isotonic exercises can prevent this volume redistribution.

However, a little ambulation seems to help a lot. For example, in stroke patients, DVT is five times more common for people who can’t ambulate, compared to those who can walk at least 50 feet.

Bed rest can tax the neurological system. For example, after several days of bed rest, patients may experience decreased concentration, orientation and intellectual skills. Behavioral and emotional changes may cause anxiety, depression, irritability and less tolerance to pain. Sensory deprivation and central nervous system changes in neurochemistry may play a role in these alterations. Research has shown changes in the levels of brain amines and behavior in rat models undergoing bed rest, which correlates to increased anxiety and depression.

Compressive mononeuropathies, particularly of the peroneal nerve at the fibular head and ulnar at the elbow, are common as well. Moreover, axillary and sciatic mononeuropathies from injections may develop. The risk factors for falls and fractures, such as weakness, ataxia, decreased bone density, postural hypotension, peripheral nerve dysfunction and confusion, add up after prolonged bed rest.

Bed rest does have obvious benefits and is necessary during initial phases of recovery from critical illness or surgery, says Dr. Goldberg. But it doesn’t have to be detrimental to a patient’s healthy outcome if you recognize potential risks, implement prevention and get patients up and moving as soon as it’s safe.

This article was adapted from a presentation at the American Academy of Physical Medicine and Rehabilitation by James K. Richardson, MD, associate professor at the University of Michigan Medical Center in Ann Arbor. Information is attributed to Dr. Richardson, unless otherwise noted.

This column was made possible by an editorial alliance between AAPM&R and ADVANCE. For information about joining AAPM&R, visit their Web site at www.aapmr.org or call them at 312-464-9700.