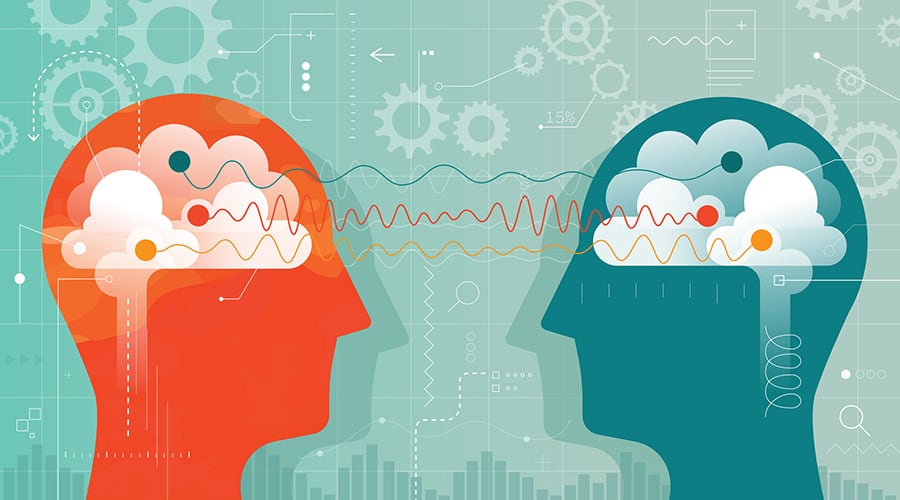 Theme: Our emotions arise from the raw sensory input of our interoceptive sensory system.

In Part I of “The Creation of Emotion: The Journey from Interoception to Embodied Self-Awareness,” I traced the neural pathways from our interoceptive sensory system, our internal sensory system which brings information to the brain regarding the state of the viscera, muscles, joints, teeth, bones, circulatory system and skin.  This information travels to the brain, either through the vagus nerve (CN X) or the spinal column where it makes many stops in the brain stem and limbic system and is itself transformed before it makes it to our conscious awareness. In Part II, I would like to look at the neural process of us becoming consciously aware of our emotions.  Much of the information in the article is from Alan Fogel’s, (2009), The Psychophysiology of Self-Awareness: Rediscovering the Lost Art of Body Sense.

Fogel explains that embodied self-awareness does not actually take place in any particular place in the brain but instead, “awareness emerges as a whole systems phenomenon, a consequence of the coactivation across these and other regions of the brain and body in the interoceptive network” (Fogel, 2009, p. 58).  This coactivation encompasses the whole body, all the way from the ergoreceptors to the anterior cingulate cortex (ACC) and sensorimotor cortices.  Complex dynamic systems have the property of emergence, in which a pattern of activity is created across all elements of the system and is not contained in any single element.  For example, water can exist in three different states, ice, liquid and vapor. It’s all the same H2O but the coactivity of the water molecules changes the way they link together as a function of temperature.  The solid, liquid and gaseous states are emergent properties of this ensemble, not within the molecules themselves.  The same holds for eddies and rapids that form in a river as a function of water pressure and volume. These patterns that emerge, these “eddies” are called attractors because the elements of the system appear to be attracted to each other in a particular way (p. 58).

Similarly, Fogel says, different states of awareness—sleep, wake, attentive, distracted—are emergent attractors of coregulating neural networks in the brain and body; “Awareness then, is an emergent pattern of neural integration across all the levels of the interoceptive network” (Fogel, 2009, p. 59).  Embodied self-awareness in the subjective emotional present is the time during which these rerepresentations remain activated across the entire neural network:  “During the subjective emotional present, there is a suspension of the sense of time and an amplification of feelings and emotions that ‘fill up’ our awareness” (p. 60).  Many different attractors can form across the entire neural network that are qualitatively different, and feel different in our bodies: elation, anger, sadness, bone-weariness, sweaty heat, bracing cold.  All of these interoceptive states of embodied self-awareness are formed from the same general neural network. However they are distinguished by the differences that originated in the receptors, “all of which the brain can identify, represent, and then bring into awareness as a particular type of felt sensation and emotion (rerepresentation)” (p. 61).

Why Does it Take So Long to Figure Out What We Are Feeling?

Interoceptive sensory input relays sensation that originates within the body, to the brain.  Exteroception relays sensory input that impinges on the body from the external world: sound, light, taste, smell, and touch.  Interoception and exteroception rely on different sets of receptors and different neural pathways to and through the brain (Fogel, 2009, p. 46).  Exteroceptive nerve fibers are larger and mylinated, and thus faster. All of the interoceptive neural pathways are small and unmylinated which means they conduct nerve signals more slowly.  This is often why

it takes several seconds to minutes to feel a particular embodied sensation, and especially to sense its source within the body (p. 47).

As you can see, the emotions we feel are literally made out of the raw material of the inner workings of our insides: our viscera, internal organs, and physiology.  When it comes to our emotions, there is no difference between our minds and our bodies.

From Quantity to Quality

During my masters program I worked in nursing homes.  When a new patient arrived, the occupational therapy department had to do an initial evaluation to determine if someone is an appropriate candidate for therapy.  Thus, I would go to the medical chart at the nurse’s station to get their medical history from their hospital stay. Quite often in the medical history there are pages of quantitative data: oxygen levels in the blood, heart rate, blood urea nitrogen levels, creatinine levels, potassium levels, sodium levels, hormone levels, respiratory rate, blood sugar: numbers upon numbers upon numbers.  Our interoceptors continuously send all of this information and more up to our insular cortex. However, we don’t see a “print out” of all of this quantitative data in our mind’s eye. Instead, our bodies do something miraculous: they take quantitative data and transform it into a qualitative gestalt: we feel hungry, or tired, or in pain, or satiated, or energized, or happy, or sad, or elated, or scared, or apprehensive, or angry, or frustrated or joyful.  How is this possible? How can quantitative data be transformed into a qualitative experience? Neuroscientist Antonio Damasio has given this a lot of thought.

Damasio asks his readers to consider that any feeling state is an integrated perception of all of the homeostatic changes as they “occur in the landscape of the body” (2010, p. 99).  There is a specific architecture through which the interoceptive input travels through the spinal column, brain stem structures, thalamus, insular cortices “so as to compose diverse landscapes for the ongoing body events”  (p. 99). Damasio reminds us that at each step along the way, each “way station” in the spinal cord and brain, the neuronal signals undergo some type of processing: “Exactly what is added in the process in not known, in neural terms, although the addition is likely to contribute to the experiential quality of feelings” (p. 100).

Dr. Joe Dispenza, D.C., a chiropractor, whose post-graduate studies have been in neurology, neurophysiology and brain function explains that the hypothalamus produces peptides which match whatever emotions we are feeling at any point in time, “So there’s [a] chemical for anger and chemicals for sadness, and they’re chemicals for victimization, they’re chemicals for lust” (2004).  Thus, one could say the physiological state of our bodies is different for each different emotion.

Our emotions are inextricably intertwined with our bodies; they are made from the raw sensory data of our interoceptive system for our survival and well being.  Since the majority of homeostatic tasks are made outside of conscious awareness, the body needs a way to tell the mind which ones require our attention the most at any given time.  Fogel writes:

Fortunately, we have a very effective method for sorting internal sensations into order of importance for deciding how to allocate awareness.  This method has a long evolutionary history across different vertebrate species and appears to have evolved specifically because it gets our attention.  This method is our emotions, our sense of whether something is good or bad for us and the accompanying motivation or urge to approach or avoid. (2009, p. 56)

It may behoove us all to listen to what our emotions, and thus our bodies are telling us for both our physical and mental health.  This intertwining of the physical, mental and emotional, is what many ancient medical systems were founded.

The Wisdom of the Ancients

Ayurveda is the indigenous medical system of ancient India which dates back even further than Traditional Chinese Medicine to more than four thousand years ago (Judith, 2004, p. 5).  This system also associates different emotional themes with different subtle energy centers that are organized around nerve plexuses running up our spinal column. Joe Dispenza, D.C. states:

Think of each of them as an individual center of information.  Each has its own specific energy that carries a corresponding level of consciousness…its own unique hormones, its own chemistry and its own plexus of neurons.  Think of these individual clusters of neurological networks as mini-brains. (2017, p. 93-94)

Thus, beginning at the bottom of our spinal column the first center deals with survival, the second with sexuality, the third with power, the fourth with love, the fifth with communication, the sixth with  intuition and the seventh with cognition (Judith, 2004, p. 7). Together, these centers describe a ladder, “connecting the polarities of Heaven and Earth, mind and body, spirit and matter,” (p. 8) for the ancients never severed the connection between mind and body as we do in our modern world.

It is interesting to note that even without modern neuroscience, they were a lot closer to the truth, than the mind/body dualism that has been driving Western thought for the last 400 years.

Damasio, A., (2010). The Body in Mind.  In Self Comes to Mind: Constructing the Conscious Brain. Pantheon Books: New York, NY.

Judith, A., (2004).  Eastern Body: Western Mind: Psychology and the Chakra System as a Path to Self: Revised. Celestial Arts: Berkeley.

Michelle Colletti, MA, OTR/L is an occupational therapist with over 20 years experience in her field. She has studied the alternative/complementary healing arts of reflexology, polarity and cranial sacral and incorporates these into her work with autistic children. She currently works at Greenhouse Therapy Center in Pasadena, CA.