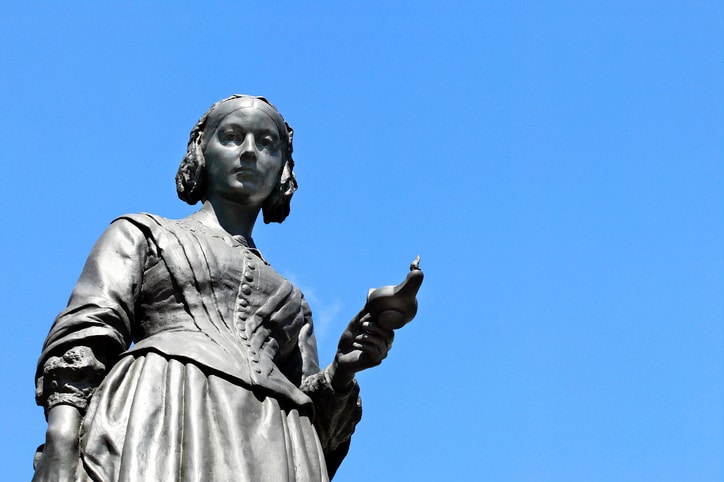 More than a century after her death, Florence Nightingale remains the historical face of nursing — and rightfully so. Credited with opening the world’s first secular nursing school in London in 1860, Nightingale, or “The Lady with the Lamp,” set a vision for the profession that has persisted for over 200 years. The standards Nightingale envisioned in the nineteenth century are still aspired to by nurses practicing today.

When Nightingale was born in 1820, the inception of the women’s rights movement in the United States was still nearly 30 years away. Advocacy efforts for women in England, where Nightingale spent most of her life, were even less evolved.

Typically, the most common career for a middle-class woman was that of a housewife.1 (In England, the organized suffrage movement began in 1866.2) Nursing, on the other hand, was considered an occupation for the poor.

According to her biography, written by the museum in London that bears her name, Nightingale sensed a calling from God at an early age to do something greater with her life. Homeschooled by her father and raised by a wealthy family, Nightingale initially excelled in mathematics as a child, though she never abandoned her passion for helping others.3

Despite her parents’ initial opposition, she went on to pursue a nursing education in the mid-1940s at Lutheran Hospital of Pastor Fliedner in Germany.4

After spending nearly a decade in Germany, Nightingale returned home and began working as a nurse in Middlesex.4 There she earned praise for her role in mitigating the impact of a cholera outbreak by improving hygiene standards — standards that would soon be sorely needed.

Tensions between Britain and its allies and Russia escalated in the early 1850s, culminating in the Crimean War. The three-year war devastated the Crimean Peninsula and cost the lives of over 650,000 people. The terrible conditions experienced by soldiers, including those who received hospital care, became widely known to the public. In 1854, Sidney Herbert, the British Secretary of War, personally wrote to Nightingale to ask that she organize a corps of nurses and volunteers to sail out to Scutari, Albania, to tend to the sick and wounded soldiers.

Upon the group’s arrival at Barrack Hospital, Nightingale began to organize the food and bed supply and prioritized improvement of the general conditions and overall sanitation.1 However, it was her establishment of standards of nursing care, such as requirements for bathing, clean clothing, dressings, and adequate food for patients that garnered the most attention of those in her company and among the media.5

Psychological care, such as assisting the soldiers with writing letters to loved ones at home, and the providing of educational and recreational activities, is also said to be among the initiatives that Nightingale encouraged, as well as the practice of visiting with patients at all hours.5 The moniker “Lady with the Lamp” is attributed to her nightly visits.

Although more recent research suggests that deaths due to prevailing conditions like typhus, typhoid, cholera, and dysentery might have been greater than once assumed, Nightingale’s impact on the lives of the sick and wounded was undeniable. On and off the battlefield, she earned a reputation as someone who brought comfort to those who needed it.

A new approach to nursing

A facility that began as a sick house with roots tracing back to 1173,7 the hospital was a well-respected establishment that underwent significant renovations under Nightingale’s influence, including introducing pavilion-style architecture and full-height windows to improve the hospital’s ventilation and efficiency.7

The Nightingale Training School for Nurses became a source of inspiration for young women, including those from wealthy upper classes.4 Rather than approaching care piecemeal, Nightingale taught a holistic approach to patient care. Designed to educate nurses in management structure, her Nightingale Method also equipped students to think through a professional lens, strengthening the reputation of the nursing industry overall.8

In the United States, however, it wasn’t until the Civil War (1861-1865) that nursing evolved into a full profession that encompassed patient treatment.9 Throughout the war, Nightingale was frequently consulted about how to best manage field hospitals. She is also credited with serving as an authority on public sanitation issues on a global scale at the time.4

Despite Nightingale’s success in elevating the global standards for nursing and nursing education, her health began to deteriorate following her work during the Crimean War. While historians and researchers have long debated the exact nature of her illness,10 it is believed she developed “Crimean fever,”4 a bacterial infection (today known as brucellosis) that primarily affects the joints and muscles.

Although she would live to be 90 years old, her condition impacted her the rest of her life, preventing her from providing hands-on training at the St. Thomas’ Hospital school. Instead, she entrusted Sarah Elizabeth Wardroper, a nurse who served as matron at the hospital, with management of the school.11

Nightingale’s impact on the nursing profession continues to the present day. Her 1859 book Notes on Nursing — one of more than 200 books, reports, and pamphlets that she wrote on hospital planning and organization — has served as a curriculum cornerstone even to the modern era.

Today, the Florence Nightingale Faculty of Nursing, Midwifery and Palliative Care at King’s College London remains one of the world’s first nursing schools to be continuously connected to a fully serving hospital and medical school.