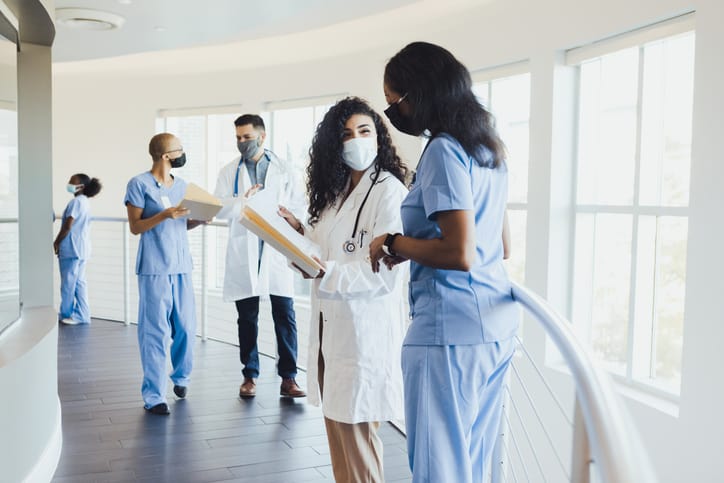 A North Carolina health center appoints its first Black female chief nursing officer. A nurse-led algorithm helps reduce rates of postoperative urinary retention (POUR) among thoracic surgery patients. Widespread racism continues to be a problem within the nursing workforce, according to a recent national survey. Read on for this week’s nursing news.

Stephanie Wroten, RN, MSN, MS, has been named the chief nursing officer (CNO) at Roanoke Chowan Community Health Center, Ahoskie, NC. Her appointment marks the first time that a Black woman has held the CNO position at the facility, according to a report by Montco.Today.

Wroten graduated from Manor College in Jenkintown, PA, earning a certificate from the school’s legal nursing consulting certificate program in 2010. The health center focuses on serving the community’s health needs and reducing health disparities by providing community aid regardless of insurance status or a patient’s ability to pay, according to the report.

Wroten grew up in Philadelphia, PA, and has spent time in Oregon.

A nurse-led algorithm is being credited with helping a Connecticut hospital reduce its rates of postoperative urinary retention (POUR) among thoracic surgery patients who are recovering from lobectomies.

According to a press release distributed by the American Association of Critical-Care Nurses (AACN), progressive care nurses on staff in the thoracic step-down unit at the Heart and Vascular Center at Yale New Haven Hospital were the first to observe a troubling trend of increased occurrence of POUR among patients recovering from thoracic surgery. POUR is a common complication for patients recovering from surgery, in which they are unable to empty their bladder, often due to clinical characteristics, surgery-related factors, or adverse effects from medication.

The nurses noticed that more patients were getting an indwelling urinary catheter when nurses followed the hospital’s newly implemented general urinary catheterization protocol. The protocol included specific criteria pertaining to voiding, within a defined time period after catheter removal that seemed too brief for thoracic surgical patients.

Interdisciplinary discussions with thoracic surgeons revealed a further concern that the use of a continuous medication delivery system for pain relief, often called the “pain buster,” was also contributing to POUR.

The nursing staff developed a quality initiative project in conjunction with thoracic surgeons and other members of the clinical team to identify the root cause of the increase and implement a voiding algorithm tailored to the needs of the patient population. The algorithm involved nurses quickly assessing patients’ bladder volume with a portable ultrasound bladder scanner to determine urine volume and post-void residual volume (PVR), a routine nursing practice in the unit. The results are objective measures of POUR status and help determine the emptiness of the bladder or the risk for bladder distention.

Nurses performed these assessments when a patient was first admitted to the unit, after the first void, and then at a routine frequency based on PVR volume and time since last void. The results determined the need for continued assessment over the 10-hour period.

Patients were considered POUR-negative with a voided volume of 200 mL or more and a PVR less than 400 mL within the 10-hour assessment window. If a urinary catheter was required during the 10-hour time frame or bladder scans indicated urinary retention, the patient was considered POUR-positive.

Most of the 167 patients (86%) included in the study were POUR-negative, while 8% were POUR-positive. (POUR status was indeterminate in 6% of the patients because their voided volumes or PVR volumes did not meet the criteria.) In the POUR-positive cohort, 10 of the 13 patients had had a lobectomy, the only factor significantly associated with POUR.

In addition to confirming the validity of nurses’ initial concerns about overuse of urinary catheterization, a study that examines the impact of the algorithm has found no association between use of the pain buster and POUR, which dispelled concerns about a potential negative effect from the pain management strategy.

“Our results demonstrate that our algorithm, tailored to the needs of this patient population, is safe and more effective than a generic protocol designed for use with all hospitalized adult patients,” said study co-author Mary Pierson, MSN, APRN, ACNS-BC, CNML, the unit’s assistant nurse manager during the study period. “Clinicians often struggle to find the balance between optimizing pain control while minimizing complications such as POUR and its associated risks. Bedside nurses provided valuable insight into our problem with POUR, and they were a crucial part of the project’s success.”

The group is expected to recommend a change in practice through the nursing professional governance structure to expand use of the voiding algorithm to other units. Adoption of the algorithm as the standard of care would ensure project sustainability, thereby minimizing the injudicious use of urinary catheterization in patients who are at risk for POUR.

Widespread racism continues to be a problem within the nursing workforce, according to a recent national survey of nurses. Conducted by the National Commission to Address Racism in Nursing, the survey shows that nearly half of respondents reported a substantial problem within the profession.

Among more than 5,600 survey respondents, racist acts are said to be principally perpetrated by colleagues and those in positions of power. More than half (63%) of nurses surveyed say that they have personally experienced an act of racism in the workplace with the transgressors being either a peer (66%) or a manager or supervisor (60%).

“My colleagues and I braced ourselves for these findings; still, we are disturbed, triggered, and unsettled by the glaring data and heartbroken by the personal accounts of nurses,” said Ernest J. Grant, PhD, RN, FAAN, co-lead of the Commission and president of the American Nurses Association (ANA). “We are even more motivated and committed to doing this important work justice. Racism and those individuals who do not commit to changing their ways but continue to commit racist acts have absolutely no place in the nursing profession.”

Many respondents across the Hispanic (69%) and Asian (73%) populations, as well as other communities of color (74%), reported that they have personally experienced racism in the workplace. Survey findings also indicate that Black nurses are more likely to personally experience and confront acts of racism.

A majority of Black nurses who responded (72%) say that there is a lot of racism in nursing compared to 29% of white nurse respondents. The majority (92%) of Black respondents have personally experienced racism in the workplace from their leaders (70%), peers (66%), and their patients (68%). More than three-fourths of Black nurses surveyed also expressed that racism in the workplace has negatively impacted their professional well-being.

“The acts of exclusion, incivility, disrespect, and denial of professional opportunities that our nurses have reported through this survey, especially our Black, Hispanic, and Asian nurses, is unacceptable,” said Adrianna Nava, PhD, MPA, MSN, RN, co-lead of the Commission and president of the National Association of Hispanic Nurses (NAHN). “Racism is a trauma that leaves a lasting impact on a person’s mental, spiritual, and physical health, as well as their overall quality of life. As the largest healthcare workforce in the country, we must come together to address racism in nursing as the health of our nation depends on the health and well-being of our nurses.”

The Commission is comprised of leading nursing organizations and has a mission to examine the issue of racism within nursing nationwide and describing the impact on nurses, patients, communities, and healthcare systems in an attempt to motivate nurses to confront systemic racism.

“Nurses are ethically and professionally obligated to be allies and to speak up against racism, discrimination, and injustice for our patients and fellow nurses,” said Debra A. Toney, PhD, RN, FAAN, co-lead of the commission and President of the National Coalition of Ethnic Minority Nurse Associations (NCEMNA). “Civil rights and social movements throughout history offer the blueprint, which demonstrates that diligent allyship is key to progress. To the nurses that challenge racism in the workplace, do not get dismayed by inaction, but continue to raise your voice and be a change agent for good.”