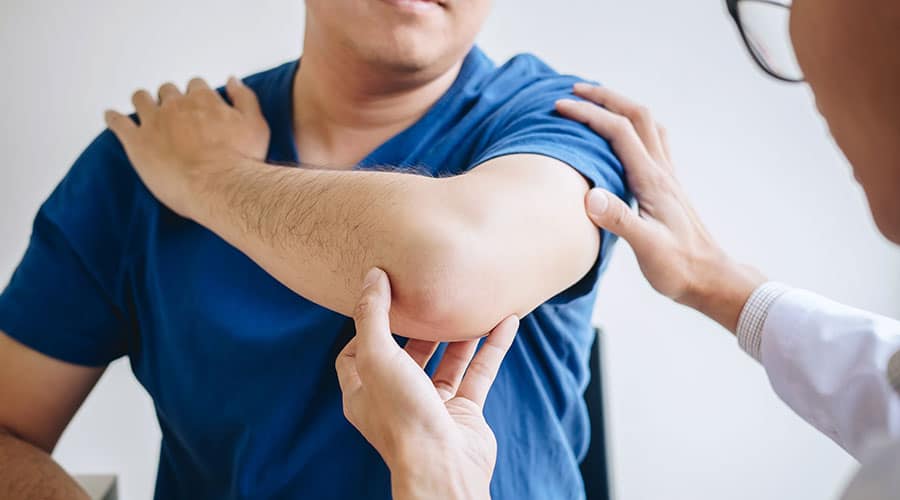 When it comes to trigger point therapy and other concepts, sometimes less is more. Elite Learning instructor Jim Menz emphasizes the importance of keeping it simple. We interviewed Menz to learn more about his “fundamentals over volume of material” philosophy of teaching. Below, he explains his personal teaching philosophy—and why trigger points are the perfect litmus test for it.

About Jim Menz and his philosophy

James Menz, MS, LMT, CSCS, is an adjunct professor in the health and exercise science department at Rowan University in Glassboro, NJ. He also teaches anatomy and physiology at Salem Community College in Carneys Point, NJ, and has worked as an instructor of Elite Healthcare continuing education courses since 2014.

Menz began teaching back in 2001, but he’s been honing his classroom technique for far longer.

“My father taught engineering for 51 years,” he explained, “and I begin almost every semester, or workshop, with an introduction of my dad. His philosophy more or less became mine—focus on fundamentals, learn how things work. If you learn the most common, basic principles, you can figure things out from that point.”

In Menz’s experience, far too often higher education becomes a quest to give students as much information as possible in the designated time period—whether that’s a college semester, or a day-long workshop.

“I call it ‘jam, cram, exam, scram,’ he explained. “You’re given this huge bank of information, you take your test, and within a few days you’ve forgotten most or all of it because you’re back into getting hammered with more information.”

Menz’s own career path reinforces the need for a curiosity and passion for the human body and helping it to work at maximum efficiency above any glossary of terminology or other knowledge gained through what he calls ‘rote memorization.’ Starting as a personal trainer in 1992, he furthered his appreciation of exercise through what he recalls as a “$6-per-hour part-time job.”

“I took some classes, and just developed my interests,” he recalled. “Personal training led me into massage therapy, which turned out to be a major interest. I worked in some clinical situations, and I found I liked working with two types of people: athletes who wanted to improve their performance, or people who were in pain, and wanted to get out of pain.”

Discussion of trigger points, and the concepts they’ve indirectly created in the rehabilitation world, have been the subject of much discussion and even controversy over the years. As such, trigger points are the perfect litmus test for Jim Menz’s “fundamentals over volume of material” philosophy of teaching.

See for yourself whether the concept makes more sense after reading the following explanation of a trigger point:

“A trigger point is a tiny piece of a muscle,” he explained. “Think back to when you were a kid, and someone told you to make a muscle. You squeeze as hard as you can, and then eventually you relax. As you do that, the muscle, which was so tense and tight, softens up and relaxes.”

The problem begins when over a lifetime of muscle contractions, sometimes portions—’tiny pieces’ in Menz’s words—of that muscle never relax. They remain tensed, or ‘flexed,’ and present as tight, hard spots within the muscle. These spots are the foundation of what we now know as trigger points.

“Imagine if I tell you to clench your biceps, and hold that position for an hour or two,” said Menz. “It would be excruciating because of the interruption to the blood flow and tension in the muscle.

“Now take that on a much smaller scale—maybe the size of a pebble—a spot where that muscle is still clenching. It never untenses, so to speak. That creates tenderness, shortens the muscle, and sometimes leads to referred pain.”

Referred pain is where the muscle tightness in one area—a shoulder, for example—creates a sensation of dull pain in the neck, back of the head, or bicep.

“That’s the big thing with trigger points,” explained Menz. “There’s pain felt in one spot, but the tight muscle causing it can be in a different area of the body. What we learn—what I teach—is how to back that up. What are the referral patterns? You need to be able to do some detective work.

“If you’re feeling some pain on the side of your head, it can be radiating from a muscle at the base of your neck. Pattern recognition is an important part of this.”

The other part is learning to detect the trigger points themselves. Menz describes this as a fine-tuned skill, which he demonstrated through a teaching anecdote.

“When I was first teaching, I had somebody put their hand on my forearm, and take it away. Then I had them put their hand back on my arm, but this time, I cranked my muscle as hard as I could.” (Menz points out that the term ‘flexed’ a muscle is technically inaccurate.)

“Obviously, the student could feel the difference in the firmness of the muscle,” Menz continued. “And that’s the skill to trigger points. Developing that skill means becoming sensitive enough, focused enough, to find that tense, hard spot when it’s the size of a pebble. They’re in there—you’ve got this big ball of bread dough called a muscle—but somewhere in there is this little pebble of tension. That’s your trigger point—find it.”

Explanations like that one, in Menz’s estimation, are the foundation of a learning experience that will produce good massage therapists—especially when contrasted with someone who’s taught a laundry list of vocabulary words or asked to memorize five different details about 40 different muscles.

“One of the greatest compliments is from other teachers who sign up for a course, and they’ll tell me ‘you helped me to change the way I teach,'” said Menz. “When someone adopts your method, that’s the definition of a compliment. But it’s not complicated—use shorter terms and guidelines. For example, muscles only pull. They can’t push. That’s universal, and it’s not going to change.

“Once you can adopt that, you can apply it forever.”