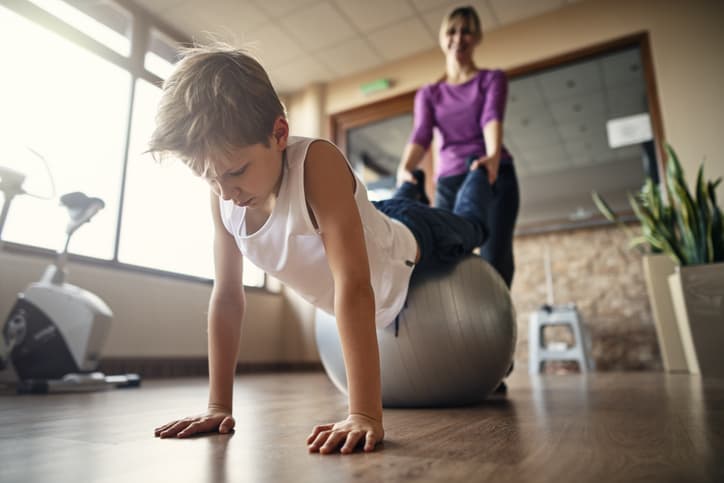 How does proprioceptive input lead to increased regulation?

During my occupational therapy training, attending many workshops on sensory integration, I was always told to use activities rich in proprioceptive sensory input to help my dysregulated clients become more regulated. I’ve jumped with them on trampolines, spotted them as they have climbed rock walls, and ran with them around the clinic all to allow their nervous systems to receive baths of proprioceptive input. Proprioceptive input has always helped my client to become more regulated. But what I’ve never understood is how. This article is my attempt to find the answer.

In occupational therapy school, and then reiterated in the many workshops I’ve attended on sensory processing, proprioception has been described as the sensory information generated by the contraction and stretching of muscles and by the bending and straightening, pulling and compression of the joints (Ayers, 1994). Ayers (1994) goes onto say how the proprioceptive sensory information travels up the spinal cord to the brain stem and cerebellum and that some of it reaches the cerebral hemispheres, but that most of it is processed in the regions of the brain not associated with conscious awareness, “Even if we try to be aware, we feel only a small fraction of all of the proprioception that is present during movement” (p. 35). Ayers (1994) goes onto say how our proprioceptive sense helps us move, that if we had less of it, it would hamper our movement, “If the proprioception from your hands were not sufficient to tell you what your hands were doing, it would be very difficult to button clothes, take something out of a pocket, screw a lid on a jar, or remember which way to turn a water faucet” (p. 35). I also learned that at the level of the somatosensory cortex, proprioceptive sensory information becomes integrated with tactile sensory information via the dorsal column medial-lemniscal pathway. This is the nerve pathway that carries sensory information to the somatosensory cortex and contributes to the planning and execution of movement (Imperatore-Blance & Schaff, 2001).

Then, working in the field with children who were severely dysregulated, who could not be still, I began to think more and more about regulation. It did not make sense to me that if proprioception went to the somatosensory cortex, how could it possibly help with regulation? What in the world does the planning and executing of movement have to do with regulation? And anyway, the children I saw were not planning anything, as they seemed to be on “automatic pilot” and in constant motion.

Then I bought a book called, The Psychophysiology of Self-Awareness: Rediscovering the Lost Art of Body Sense, and I learned about interoception, the body’s ability to receive sense information from receptors that respond to its internal state. The brain uses interoceptive sense information to help regulate all of the functional systems of the body (Fogel, 2009, p 50). And the receptors are found in all soft tissue areas of the body: the muscles, joints, teeth, bones, circulatory system, skin, and viscera (p 45-46). Muscles! But I thought muscles provide proprioceptive sensory input?

The next stop after the hypothalamus is the thalamus, specifically, the ventromedial (VM) portion. The thalamus plays a large role in being the relay station where all sensory information (except olfaction) gets sorted before going up to the cortex. The thalamus also organizes efferent impulses back to the body. From the ventromedial thalamus the interoceptive pathway travels to the posterior region if the insular cortex. The insular cortex is a cortical area beneath the temporal lobe, adjacent to many limbic structures. The posterior insula sorts out the different feeling quality of each different receptor, itchy, tingly, hot, fatigue. Say I have an itch to scratch, the insula allows me to identify the itchy feeling, the hypothalamus sends a signal there is something amiss that needs to be attended to and the efferent signals from the thalamus relays the information to the appropriate motor centers for scratching it (Fogel, 2009, p. 53)!

There is another interoceptive pathway from the thalamus to the anterior cingulate cortex and from the anterior cingulate cortex (ACC) to the insula. The ACC lies just above the thalamus. The ACC is adjacent to the cortical motor areas and has connections to them. The ACC can initiate internal actions via the autonomic nervous system, back through the hypothalamus, brain stem and then the internal organs to influence such physiologic occurrences such as, for example, heart rate, changes in breathing, flushing and sweating. The ACC is also involved in the motor expression of emotion, “So, shame may result in hiding or covering the face, anger in making a fist, while joy may result in laughter” (Fogel, 2009, p. 56).

In a 2017 article, Nadine Gogolla calls the insular cortex “a true anatomical integration hub with heavy connectivity to an extensive network of cortical and subcortical brain regions serving sensory emotional, motivational and cognitive functions” (p. R581). She explains that thalamic and cortical afferents carry information to the insula from outside of the body in the form of auditory, tactile, olfaction, gustatory and visual information along with the interoceptive sensory information it receives. Much of this information is organized in topographic regions in the insula, for example, the visceral insular cortex, the auditory and somatosensory fields. Yet, as Gogolla explains, all regions of the insula receive rich cross-modal afferents and it would be better to think of the areas as multimodal integration sites (p. R581). She goes onto explain that the insula makes reciprocal connections with the limbic system and with the frontal brain areas besides the anterior cingulate cortex, but also the orbitofrontal and medial prefrontal cortices, all of which are implicated with cognitive, emotional and executive functions.

Gogolla (2017) calls interoception the ability to perceive our bodily states and is the chief function of the insular cortex. It certainly seems to be the hub which integrates external sensory information with visceral information, including blood pressure, oxygenation, the motility of the digestive system, the timing and strength of the heartbeat as well as pain, hunger, nausea, tickle, itch and many more bodily sensations. It also exerts top-down control of autonomic functions, for example heartbeat, blood pressure, gastric motility, etc…perhaps though direct connections with the hypothalamus. Thus, the insular cortex is a site where bodily sensations, autonomic function, and external sensations combine and a locus of our subjective sense of ourselves (p. R582-583).

I think now I may have my answer. Proprioception is also interoceptive sensory information and goes to the insular cortex, and the insular cortex has top-down influence on the autonomic nervous system. The autonomic nervous system plays a key role in regulation. Judith Bluestone (2005), a woman who worked extensively with children on the autism spectrum describes deficits in interoceptive proprioception as “feeling like an astronaut, drifting unmoored in space and needing to be held down by anything available…” (p. 53). In my practice I work with many children on the autism spectrum that have difficulties falling asleep at night without the feel of a parent next to them, which according to Bluestone is another sign of interoceptive proprioceptive dysfunction. Perhaps it is time for us occupational therapists to stop thinking of proprioception only in terms of its role in motor function but to begin to see it through the lens of interoception.

Grow your career and fulfill your CE with Elite Occupational Therapy Passport Membership for OTs and OTAs.