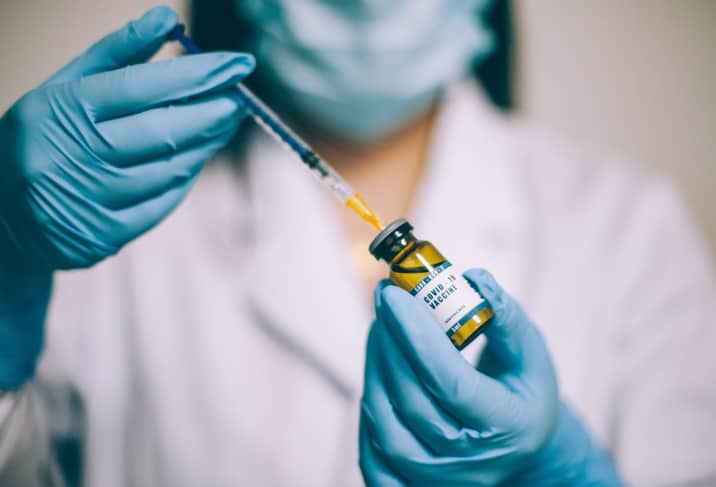 At least 176 million cases of coronavirus (COVID-19) have been diagnosed worldwide as of Monday evening, June 14, 2021, including at least 3.81 million deaths. Healthcare officials in the United States have reported at least 33.4 million positive COVID-19 cases and approximately 600,000 deaths. Source: Johns Hopkins University & Medicine

At least 2.26 billion individual doses of COVID-19 vaccine have been administered worldwide as of Monday evening, including at least 309 million in the United States. Source: GitHub

A newly developed recombinant nanoparticle protein-based COVID-19 vaccine has demonstrated 100% protection against moderate and severe disease as well as 90.4% efficacy overall, according to officials with Novavax Inc., Gaithersburg, MD. The drug has also met the primary endpoint of a Phase 3 trial that enrolled nearly 30,000 participants across 119 sites in the United States and Mexico. The PREVENT-19 study placed an emphasis on recruiting a representative population of communities and demographic groups most impacted by the disease, officials said.

“Today, Novavax is one step closer to addressing the critical and persistent global public health need for additional COVID-19 vaccines,” said Stanley C. Erck, president and chief executive officer at Novavax. “These clinical results reinforce that [the vaccine] is extremely effective and offers complete protection against both moderate and severe COVID-19 infection. Novavax continues to work with a sense of urgency to complete our regulatory submissions and deliver this vaccine, built on a well-understood and proven platform to a world that is still in great need of vaccines.”

“PREVENT-19 confirms that [the vaccine] offers a reassuring tolerability and safety profile,” said Gregory M. Glenn, MD, president of research and development at Novavax. “These data show consistent, high levels of efficacy and reaffirm the ability of the vaccine to prevent COVID-19 amid ongoing genetic evolution of the virus. Our vaccine will be a critical part of the solution to COVID-19 and we are grateful to the study participants and trial staff who made this study possible, as well as our supporters, including the U.S. Government.”

Efficacy endpoints were accrued from January 25 through April 30, 2021—a time when the Alpha variant first identified in the United Kingdom became the predominant strain in the U.S. Other strains, including Variants of Interest (VoI) and Variants of Concern (VoC), were also on the rise during the PREVENT-19 endpoint accrual window. The U.S. Centers for Disease Control and Prevention (CDC) offers definitions of the variants. The CDC has defined VoI as a variant with genetic markers that have been associated with changes to receptor-binding, reduced neutralization by antibodies generated against previous infection or vaccination, or predicted increase in transmissibility or disease severity. A VoC is defined as a variant for which there is evidence of an increase in transmissibility, more severe disease, significant reduction in neutralization by antibodies generated during previous infection or vaccination, reduced effectiveness of treatments or vaccines, or diagnostic detection failures.

More information on the Novavax vaccine can be found online.

Preliminary safety data from PREVENT-19 also showed the vaccine to be generally well tolerated. Serious and severe adverse events were low in number and balanced between vaccine and placebo groups. No single adverse event term was reported by more than 1% of participants. In assessing reactogenicity 7 days after dose No. 1 and dose No. 2, injection site pain and tenderness, generally mild to moderate in severity, were the most common local symptoms, lasting less than 3 days. Fatigue, headache, and muscle pain were the most common systemic symptoms, lasting less than 2 days. The primary endpoint for PREVENT-19 was the first occurrence of polymerase chain reaction-confirmed symptomatic (mild, moderate, or severe) COVID-19 with onset at least 7days after the second dose in serologically negative adult participants at baseline.

Novavax officials said they expect to share further details of the PREVENT-19 trial results as additional data become available. Further analyses of the trial are ongoing. The placebo-controlled portion of PREVENT-19 continues in adolescents ages 12 to less than 18 years, which recently completed enrollment with 2,248 participants.

Physicians in southeastern China are reporting that the delta variant of the coronavirus is spreading in a more severe fashion than the initial virus strain. According to a recent article by the New York Times, patients are becoming sicker and their conditions are worsening more quickly. The virus concentrations that are detected in patients’ bodies also climb to levels higher than previously seen and then decline more slowly. Up to 12% of patients become severely or critically ill within 3-4 days of the onset of symptoms as compared to 2-3%, and occasionally up to 10%. Doctors in Britain and Brazil have reportedly seen similar trends as far as circulation, but severity has not yet been confirmed.

The World Health Organization labeled the delta variant a “variant of concern” in May after it was first identified this spring in India. Delta is now the dominant variant in Britain, where doctors suggest that it is more contagious and may infect some people who have received only one of two doses of a COVID-19 vaccine, according to the Times report. China has more detailed data because it has “essentially universal testing in the vicinity of outbreaks, allowing officials to gather detailed information on the extent of cases.”
Chinese authorities have not indicated how many of the new infections have occurred in people who had been vaccinated.

A pending mask-wearing workplace regulation in California has been withdrawn while a new rule can be written. The pending rule, which had been adopted in early June after it was initially rejected by the California Occupational Safety and Health Standards Board, would have allowed workers to forego masks only if every employee in a room is fully vaccinated against the coronavirus. That contrasts with the state’s broader plan to do away with virtually all masking and social distancing requirements for vaccinated people in concert with the latest recommendations from the U.S. Centers for Disease Control and Prevention (CDC).

The Standards Board voted to withdraw the revisions to the prevention emergency temporary standards that they had voted to approve on June 3 and that were sent to the Office of Administrative Law (OAL) for review. The vote was held during a special meeting on June 9 to consider the latest guidance regarding masking from the CDC and California Department of Public Health. The meeting, attended by members of the public including workers, industry leaders, employers, and other stakeholders shared their views on the matter.

Last November, the Board adopted emergency temporary health and safety standards to protect workers from COVID-19 that went into effect that month. On June 3, the Standards Board voted to adopt revisions due to the changing nature of the COVID-19 pandemic. Those revised emergency standards were expected to go into effect no later than June 15, pending approval by the OAL within 10 calendar days after the Standards Board rulemaking package submission. The Standards Board voted unanimously to withdraw the revisions approved on June 3 that are currently at OAL for review but have not yet become effective. The Board could consider new revisions at a future meeting, perhaps as early as the regular meeting on June 17. In the meantime, the protections adopted in November of 2020 will remain in effect.

The efficacy of the coronavirus vaccine is proving itself, actually, through numbers of rising cases. At the state level, the relationship between cases and vaccinations finds that there are generally fewer new cases of COVID-19 in states where vaccination rates are higher. States with lower vaccine rates are seeing more new cases, and in some instances those numbers are rising, too. According to a study by The Washington Post, the connection between vaccine shots and coronavirus cases has been varied.

Nationally, 43% of eligible Americans are fully vaccinated and the country is averaging fewer than 16,000 new infections per day—levels not seen since the early days of stay-at-home orders in March 2020. Ten states, concentrated in the Deep South and rural West, report fewer than 35% of residents are fully immunized, according to the Post study. Sweetwater County in Wyoming, with a population of 44,000, is experiencing the most new infections per capita in the country with only 25% of residents fully vaccinated. Nearly 600,000 Americans have died of COVID-19 overall. The Post also reports that safeguards such as temperature checks and hyper-scrubbing of surfaces continue to offer little more than symbolic protection.