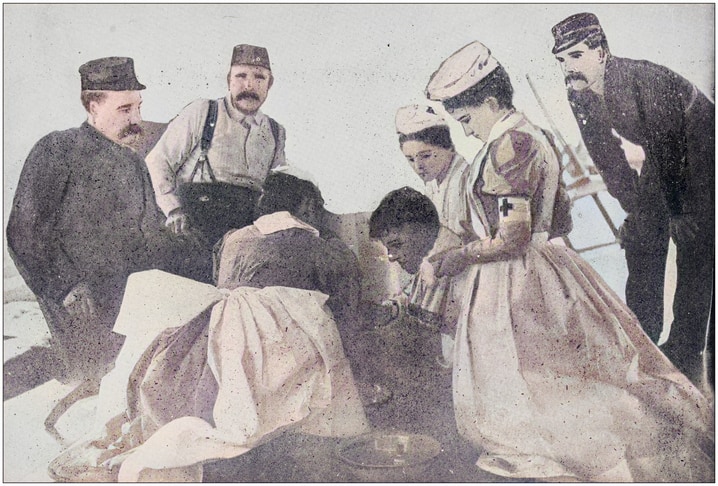 This is the 2nd installment of our column that examines the people and events that have impacted nursing across the globe. The first part can be found here.

Although the foundations of the nursing profession were laid in the mid-1800s, when Florence Nightingale opened the world’s first secular nursing school, the “practice” of nursing in the West traces its roots back to the American Revolutionary War.

By the time the fighting ended in late 1782, the more than 1,500 battles of the Revolutionary War had resulted in an estimated 6,800 American deaths.1 British and other non-American casualties reportedly climbed to upwards of 30,000.1

Those American fatalities, however, did not include the nearly 17,000 soldiers who died, not by bullet wounds or cannon fire, but by illnesses such as dysentery, malaria, and smallpox. Without a clear understanding of germ theory or how diseases spread, clinicians in the war camps were ill-equipped and unprepared to treat sick soldiers or stop the spread of infections.2

Thankfully, medical science would see improvements prior to America’s independence becoming official when the war ended on Sept. 3, 1783, more than seven years after the first shots were fired in Massachusetts.

With the help of both male and female nurses, physicians became more adept at performing amputations, perhaps the most significant way in which lives were saved. These life-saving efforts would lead to a growing population of disabled veterans who would require ongoing care and, incidentally, the creation of a federal financial pension system.

As more people survived their war wounds, the role of nursing began to take clearer shape and move beyond the confines of residential homes. By the time that public care facilities like hospitals become more sophisticated, an outline of a nurses’ role in healthcare had already been drawn.

Nursing before the war

In many ways, medical science was still in its infancy when the American Revolution broke out on April 19, 1775, according to Tyler Putman, senior manager of gallery interpretation at the Museum of the American Revolution in Philadelphia. “There weren’t formal nurses in the sense that people were trained or certified,” he said. “There were wet nurses who breastfed babies. But nursing as we think of it in the medical sense would have been something that all sorts of individuals did on demand in the home – including family members, paid servants, or enslaved people.”

Nursing through the ages

Records indicate that wet nursing began as early as 2000 B.C.E. and continued until the feeding bottle was introduced in the 19th century, evolving from an “alternative of need” to an “alternative of choice.”3 In ancient Israel, breastfeeding was considered a religious obligation.3 In Greece, women of higher social status frequently demanded wet nurses.3 Wet nurses would hold authority over enslaved people, although some enslaved individuals were also wet nurses.

From the end of the 18th century through the 19th century, the practice of wet nursing shifted away from wealthy families to laboring, lower-income families.3 Nurse-midwifery was not established until the 1920s, but in American Colonial times, childbirth was a social event that included midwives who would typically stay with families for several weeks following births to help with household tasks and child care.4

It’s not until the 18th century that nursing took on the broader definition of providing care and assistance to others. Until then, when the average person got sick, families would consult medical advice from books passed down from parents or servants.

Poor families who lived in urban settings might have also benefited from early hospital settings or a public almshouse, which were among the first social medical institutions that offered walk-up services by professional healthcare staff members. However, those who lived in rural settings likely did not have these types of options yet, according to Putman.

Regardless, the services within the home and outside of it were rather rudimentary. “When it comes to nursing and medicine, the vast majority of Americans who did those things were acting more on experience and less on science,” Putman said. “For example, if you were a midwife, you were delivering babies based on what seemed to work best for increasing the survivability of the babies as opposed to what was scientifically proven. This is a world where there are few trained doctors in the professional sense — most of whom would have received training in England because there were not yet medical schools in the Colonies.”

Though war and bloodshed had been a recurring motif on the North American continent since the arrival of European colonists, the American Revolution (although not as transformative for healthcare as the Civil War and World Wars would later prove to be) nevertheless marked a turning point in the development of nursing.

“The scale and the number of battles, and the number of people involved in [the American Revolution] was really different. It was bigger than any prior war. When it came to medicine and healthcare, it meant a lot more activity — such as soldiers requiring amputations due to gunshot wounds. There were also a lot of what became known as ‘camp diseases’ that were passed along in fecal matter or airborne germs. And the healthcare providers at that time were not very good at treating these conditions, but it suddenly became much more of a problem than it was previously, or would have been had the war not happened.”

Healthcare in the midst of revolution

According to author Elizabeth Rorke, there were approximately 3,500 practicing physicians in the colonies in 1775, some of whom were trained at Philadelphia’s Pennsylvania Hospital, the first medical college opened in America in 1768.

During the war, anyone with any medical knowledge was pressed into service.2 Amputations became increasingly common as surgeons learned to perform the procedures more quickly, and an increasing number of lives were ultimately saved that might not have been saved had the opportunity to amputate been less frequent.

These efforts did not come without extreme pain to soldiers, however. As Rorke writes for Brandywine Battlefield Associates: “The surgeon performed an amputation without the type of anesthesia or sterilization we know today . . . Officers received rum and brandy when it was available, but for enlisted men, a wooden stick to bite down on had to suffice.”

“The surgeon used his amputation knife to cut down to the bone of the damaged limb,” Rorke explains. “Arteries were moved aside by tacking them away from the main area with crooked needles . . . The surgeon chose his bone saw, a small one to remove arms and a large upper femur saw to remove a leg above the knee. A competent surgeon could saw through the bone in less than 45 seconds. The patient, who had more than likely gone into shock and had a much lower than normal temperature, was stabilized when possible.”2

Although only about 35% of those who experienced amputations survived them, the battlefield nevertheless provided early medical professionals an opportunity for practice and observation.

During the Revolutionary War, injuries to militia soldiers were occurring on a small enough scale that they could return home — which would not have required much travel — to be nursed. In 1776, when George Washington formed the Continental Army, more soldiers began to suffer injuries further away from home, requiring on-site assistance.

“It was a lot of work to do and a lot of people to oversee, so the army would designate soldiers to serve as nurses, which really meant trying to keep camps clean and people fed,” said Putman. “Maintaining the housing where the convalescent people were — making sure people get to a bed or a spot that is cleaned. This model essentially held for the entire war. [Nursing didn’t] necessarily evolve into anything more sophisticated than that.”

Aside from soldier-designated nurses, there were both voluntary and paid female civilian nurses who were assigned certain duties during the war. Women often traveled with both the British and Revolutionary armies as “camp followers,” said Putman.

“Despite later stereotypes related to sex work, the majority of these women were relations of soldiers and were regarded as essential to the functioning of the armies,” he said. “They were paid to do laundry and nursing work and often sold foodstuffs to soldiers. Preparing food and feeding patients. Changing the bed linens or the straw [that soldiers slept on], and the clothing. Discharging people from care. Burying bodies.”

Martha Washington, who would later become the first First Lady of the United States, spent approximately half of the war with her husband in his camp or somewhere nearby to organize and assist nursing efforts.5 She knitted for the soldiers, visited hospitals, and raised money with the help of other women that was used to buy soldiers shirts and other supplies.5

Despite the extreme political nature of the warfare and the historical significance of the battles, all soldiers were generally treated consistently by both sides when they were wounded, injured, or ill, Putman said. “If they fell into the enemy’s hands, they were treated equally by nurses on both sides. There might have been a favoring or prioritizing of one’s own side, and the British were known to put captured Continental soldiers into squalor camps or prisons that would have had limited access to healthcare, but there is not evidence that suggests the British operated a nursing system that was different than the Continental Army’s.”

Enlightened change for a new nation

Despite the lack of sophisticated healthcare practices during the Revolutionary War, there remains reason to believe that the science behind some of our medical care today can be connected to experiences gained as America fought for its independence.

“This is at the peak of the Enlightenment, a movement that emphasized experimentation, rationality, and logic,” Putman said. “People were starting to investigate questions in a way that today we would recognize as scientific. They were eliminating variables and conducting experiments.”

According to Rorke, the battle injuries “gave physicians an opportunity to witness more in one day than they could have acquired in years of a peacetime medical practice. It was experience that helped give new direction to the medical profession of a new nation.”2