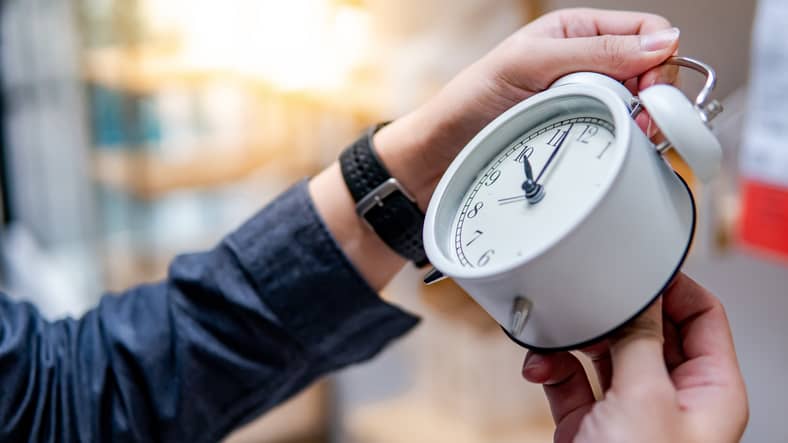 Twice a year, many Americans call on the familiar mnemonic device as they adjust their clocks to the new time.

First proposed — somewhat satirically — by Benjamin Franklin in 1784, the U.S. adopted Daylight Saving Time (DST) during World War I, along with many other nations, in a wartime effort to conserve energy. However, it wasn’t until 1966 that Congress passed legislation to establish an official, uniform Daylight Saving Time via the Uniform Time Act.

In recent years, though, many citizens and policymakers are questioning the continuing value of DST. So it’s worth asking: what are the pros and cons of DST?

The benefits of Daylight Saving Time

Besides the obvious benefits of keeping a country on a coordinated schedule, setting clocks ahead in the summer months shuffles an extra hour of daylight to the end of the workday, allowing for those who work 9am-5pm shifts to enjoy more evening activities.

This additional evening leisure time can be an economic boon for businesses, especially to those in the outdoor and recreational space. A 7% decrease in crimes like robbery and assault in the summer months may also be tied to DST, as it allows for more daylight during the times when many people are getting out of work and returning to their cars.

The costs of Daylight Saving Time

These benefits, however, are not shared by everyone, and they seem to come at a significant cost to our overall physical and mental health. Restructuring the day to accommodate a 9-5 worker does little for those who work evening, night, or morning shifts.

But the cons of DST go deeper, right to our biology. DST interrupts normal circadian rhythms. These rhythms are dictated by a cluster of neurons in the brain called the suprachiasmatic nucleus, or SCN, which receives information from the eyes and is highly impacted by the presence of light. When our internal body clocks are thrown off by the changing times, it affects digestion, blood pressure, attention, concentration, stress, mood, and more.

For vulnerable populations, that change may be fatal. Research has shown a 25% increase in heart attacks the Monday following the beginning of Daylight Saving Time. Increasing rates of cancer, obesity, and diabetes have also been traced back to the change in sleep habits driven by DST.

Other studies have explored the impact of DST on decision-making, with effects ranging from increased traffic accidents to longer, harsher criminal sentences delivered by DST-sleep-deprived judges.

Even energy savings, which are touted as a benefit of DST, have a smaller impact on individual homes than might be expected. A Department of Energy study found the average household only saved about 0.5% in electricity costs per day during DST — a small savings that might not offset the full weight of the physical and psychological downsides of Daylight Saving Time.

Though the nation as a whole abides by DST, many states have proposed legislation that effectively “locks the clocks,” removing the need for biannual time change. Some of the main states include: Florida, California, Arkansas, Delaware, Maine, Oregon, Tennessee, Washington, Idaho, Louisiana, Ohio, South Carolina, Wyoming, Alabama, Georgia, Minnesota, Mississippi, and Montana.

In 2021, Representative Vern Buchanan of Florida introduced H.R. 69 to the U.S. House of Representatives, colloquially known as the Sunshine Protection Act. If passed, this bipartisan bill would end the nationwide practice of springing forward and falling back.

The bill passed unanimously in the Senate on Tuesday, March 15. If it were to be passed in the House and signed by President Biden, it would go into effect November 2023.