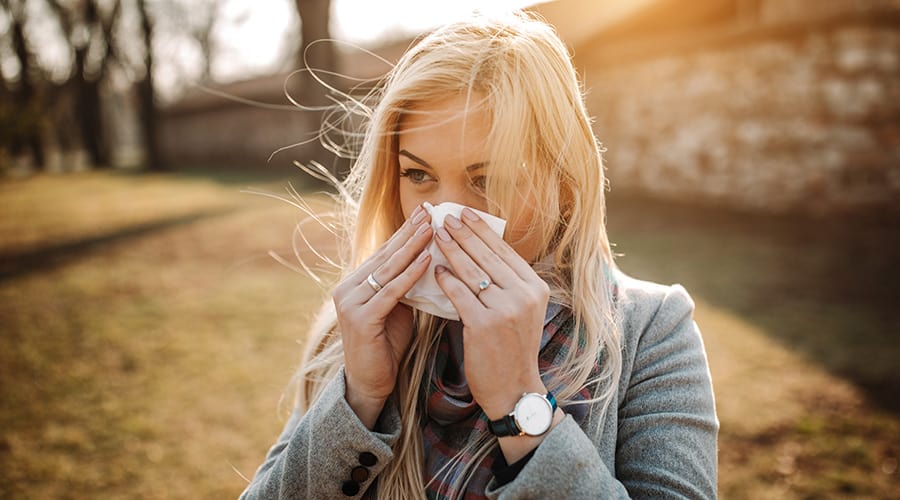 Both allergies and asthma affect millions of Americans every year, and the links between the two are still being explored. “Seasonal” allergies are highly individual—based on what each person is allergic to, symptoms will emerge during the time frame that the allergen is “in season.” However, allergy sufferers can also experience symptoms year-round. Additionally, many allergy sufferers also experience asthma, which intensifies symptoms.

Allergies and asthma by the numbers

Did you know that allergies are the 6th leading cause of chronic illness in the United States? Upwards of 50 million Americans suffer from allergies each year—and the cost is approximately $18 billion!

May is Asthma and Allergy Awareness Month. Visit AAFA.org to learn more. Plus, access their free fact sheet for helpful info about asthma.

The link between allergies and asthma

It may seem that allergies and asthma occur concurrently, without a relationship. While this may be true, most of the time there is a strong link. According to James T C Li, MD, PhD, an allergy specialist at Mayo Clinic, The same substances that trigger your hay fever symptoms, such as pollen, dust mites and pet dander, may also cause asthma signs and symptoms. In some people, skin or food allergies can cause asthma symptoms. This is called allergic asthma or allergy-induced asthma.”

Symptoms of both allergies and asthma occur because the immune system mistakenly identify a harmless substance, such as grass, as an invader. The body then attempts to protect itself against the invader by producing antibodies. This causes symptoms of both asthma and allergies to occur – nasal congestion, itchy eyes, rashes, and even shortness of breath and other asthma symptoms.

Anything can be a trigger—something that causes allergic or asthmatic symptoms. However, there are certain triggers that are undoubtedly more common.

Montelukast (Singulair) is a leukotriene modifier that helps to control the immune response during an allergic reaction. It’s a highly effective treatment; however, it may lead to suicidal thoughts in rare cases.

Immunotherapy, or allergy shots, are given after being tested for allergies. Once it is known what you are allergic to, shots can be made that provide tiny amounts of these allergens. By giving tiny amounts of the allergens, a gradual reduction in the immune system response is noted. Eventually, allergy and asthma symptoms diminish. Typically, treatment lasts three to five years.

The antibodies that are released during an allergic reaction are IgE antibodies. When the allergen is experienced again, IgE antibodies will sense the allergen and histamine will be released. Anti-immunoglobulin E (IgE) therapy helps to reduce this response. Omalizumab (Xolair) is one such therapy.

To learn more about asthma, enroll in our respiratory therapy CE course: Asthma, As a Disease State, 2nd Edition

Krystina is a 30-something RN, BSN, CDE who has worked in a variety of nursing disciplines, from telemetry to allergy/immunotherapy to most recently, diabetes education. She is also a writer and has enjoyed expanding her writing career over the past several years. She balances her careers as a nurse and a writer with being a wife and a mother. She has a four year old son who is an inquisitive, energetic little guy who is up for anything. She also enjoys reading, traveling, cooking, baking, and yoga (both practicing and teaching).