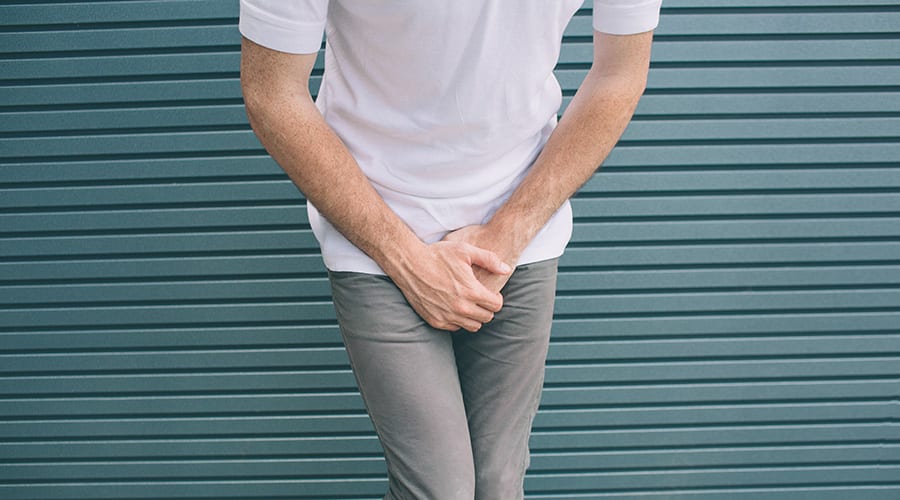 As a pelvic floor physical therapist, I hear this from my patients almost weekly. Sometimes it comes from men, sometimes from women. Occasionally it’s from other healthcare professionals.

While pelvic floor therapy is critical for women, men have pelvic floor muscles, too. They can suffer from many of the same problems that women do, including incontinence, rectal pain, constipation, urinary urgency and frequency issues, and painful intercourse. They may also experience ejaculation problems. Many men present with incontinence issues after surgery for prostate removal or treatment for an enlarged prostate.

In fact, pelvic floor dysfunction in men is much more common than once believed. Studies show that 95% of cases of chronic prostatitis in men is nonbacterial, and could indeed have a musculoskeletal origin.

Pelvic floor dysfunction and spasm can create symptoms that mimic prostatitis by causing pain and urinary symptoms. Often patients describe symptoms as sharp, shooting, stabbing, burning, dull, and/or achy pains in the area of the genitals, abdomen, back and/or hip region. These symptoms, which are similar to what men describe with type III B prostatitis or non-bacterial prostatitis, are commonly the result of a musculoskeletal disorder.

Risk for incontinence increases when the man is over 70 years old or has detrusor overactivity (overactive bladder) before surgery. This occurs because the prostate surrounds the urethra and supports it to help control urination. After prostate removal surgery, the pelvic floor muscles have to work harder to make up for the loss of support. If they are not able to do so, men can experience incontinence episodes.

Coughing, laughing, sneezing, jumping, or getting up from a chair can be especially challenging for the muscles to control. Studies show that pelvic physical therapy before and after surgery can help train the pelvic floor muscles to reduce incontinence.

The body is asking the muscles to do something they have never had to do before, so average muscles need conditioning to bulk them up and support the urethra. Strength, endurance, and coordination training for the pelvic floor help prevent leaks. MRI images comparing pelvic muscles before and after recovering from incontinence showed that pelvic muscles were thicker, and the bladder neck was moved higher and forward after they regained continence.

As specialists in the musculoskeletal system, physical therapists rely on strengthening and biofeedback to treat pelvic floor weakness. Therapists also treat hypertonic (increased tone) pelvic floor problems. The increased tone or spasm may result in a reduced range of motion and/or pain in the pelvic region. Because these muscles surround the urethra, anorectal area, and prostate, a dysfunction in these muscles can disrupt normal urinary, bowel, and sexual function.

There are many published cases of success for the male population who sought out the care of a physical therapy for a pelvic issue. A recent case report in the Journal of Women’s Health Physical Therapy outlines management of a 76-year-old male patient with mixed urinary incontinence post prostatectomy 10 years.

This case report describes the multifaceted management of a typical patient post radical prostatectomy, which included physical therapy. The patient reported mixed urinary incontinence symptoms. He used 3-4 adult incontinence pads per day and 1 pad at night. He reported nocturia 3-4 times per night. 2-3 times per week he had large urinary incontinence episodes that soaked through his clothing. He also complained of the inability to delay voiding and having urinary accidents with walking to the bathroom, sit to stand, lifting, coughing, and sneezing.

For the home program, the patient completed progressive reps and sets of 10” (targets slow twitch) and 2” (targets fast twitch) PFM isometrics in supine progressing to standing. The therapist instructed him in the use of “the knack” (volitional pelvic floor muscle contraction before and during cough or other physical exertions to prevent accidents.

The patient also implemented ladder retraining and lifestyle recommendations to address the behaviors that were likely contributing to urgency and urge symptoms. His therapist also prescribed abdominal exercises targeting Transversus Abdominus for their role in core support with pelvic floor muscle contractions.

The patient experienced extremely positive outcomes. In a short time (5 visits) he had reduced urinary leakage, evidenced by reduced undergarment changes and reduced pad usage per day. His pads were less saturated, and he no longer had leakage that spread to his clothing. He had a 50% reduction in UI episodes reported on his bladder diary and a 50% reduction in nocturia from 4 times to 2 times per night.

The patient also reported reduced daily urinary frequency from 7 to 5 times per day with no instances of severe urgency. He demonstrated an improved PERFECT score of 4, 10, 8, 10 (initially his score was 2, 5, 3, 5) indicating improved PFM strength and endurance. The patient had improved pelvic muscle coordination and could isolate his contractions without Valsalva or accessory muscle activation. He had one strength grade improvement with abdominal strength.

Finally, this patient improved his rating on the outcome questionnaire (International Continence Society Male Short Form (ICSmaleSF)) at discharge, indicating overall improved quality of life. At initial evaluation, this patient rated “a lot” (3 on ICSmaleSF) when asked how much the urinary symptoms interfered with his life, at discharge he reported “not at all” (0 on ICSmaleSF).

Never too late for therapy

Of interest in this case is the fact that the patient had surgery ten years prior to engaging in any element of physical therapy. While physical therapy is recommended as soon as possible after procedures like prostatectomies (and often prior to it), patients can still make significant gains even a decade after surgery.